After a few false starts, I managed to get Ubuntu 10.04 running in VMware Player, and to get Softimage to start up. 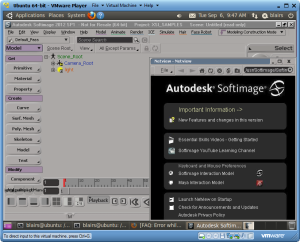 To get Softimage to start, first I had to edit MentalRayOptions.spdl and removed the µ (mu) character. Softimage still crashed at startup, so next I tried a tip I got from La Maison: setenv LC_ALL POSIX, but I still crashed.

Finally, I edited $XSI_HOME/Application/layouts/Default.xsily and hid the OpenGL viewports, and then Softimage started up.

So, based on that, I’ve been trying to switch from the nouveau drivers to the real Nvidia drivers for my QuadroFX 4800. But it doesn’t seem to be possible in a VM. I’ve tried https://help.ubuntu.com/community/BinaryDriverHowto/Nvidia, but I end up with this:

I checked with QA, and they hadn’t had any luck either with nvidia drivers for Ubuntu in VMs.

Sigh, so close yet so far…

8 thoughts on “Softimage on Ubuntu in VMware Player”