After last Friday’s flashback about the origins of the name XSI, several readers asked why I didn’t mention “NL3D”…

Between the code name Sumatra and the eventual product name XSI, there was the infamous NL3D name.

So, for the record, here’s a timeline of the NL3D naming debacle 😉 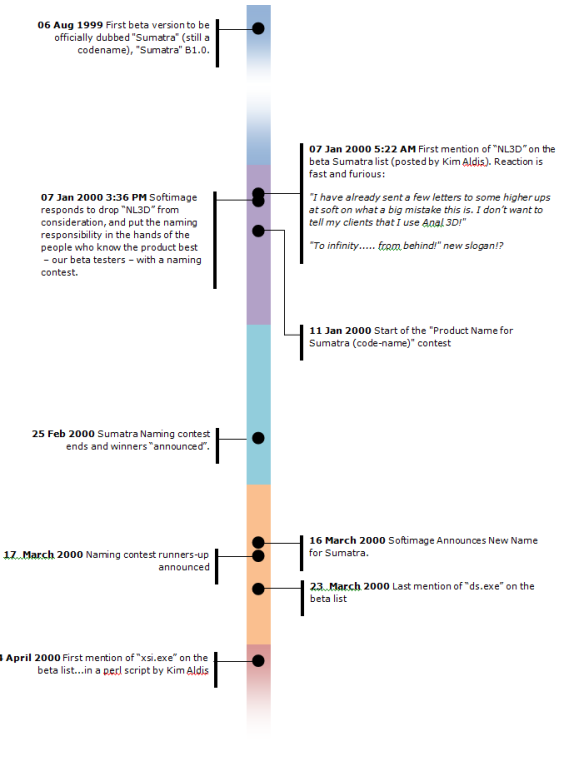 Someone leaked the “NL3D” name to the beta testers:

And a “ex-Sumatra” thread sprang up on the Sumatra beta list:

Hi All:
Quick background and update on the naming of Sumatra. Over the past year, we have entertained many names for Sumatra and narrowed it to several candidates (through a long and most painful legal process). One line of thinking focused on NLA (non-linear animation) and thus Softimage|3D NLA was born and then modified to become NL 3D. Despite the obvious crappy connotations, we continued to use it as a place-holder and potential name.

Obviously due to the passionate and focused response from our own staff and key customers (thank for getting the ball rolling, Greg) we will now remove this as a contender and as suggested by the forum, place the naming responsibility in the hands of the people who know the product best – our beta testers. Thus, starting next week, we will introduce a contest (with prizes) to help name Sumatra (details to follow early next week).

On 25 Feb, Softimage Marketing announced the “winner”. More accurately, they announced that a winner had been chosen:

And the winner is…

We want to thank all of you for your contributions to our name contest, your choices were great additions.
After much deliberation, we finally chose a name which we developed internally, so there was no beta forum winner.

We intend to announce the new name at the Sumatra (codename) kick-off launch held in Montreal on March 16.

Our worldwide launch locations and details will follow in a week or so.

On March 16, the new name “XSI” was announced. This press release explains the origins of the name.

“Today, we are opening a brand new chapter in the Softimage story. `Sumatra’, after several long years of hard work, dedication and passionate belief in a true vision, is about to be released into the hands of our customers. And after many months of discussions , `Sumatra’ now has a new name: SOFTIMAGE|XSI.”

“The origins of this name are humble continues Dumas. “.xsi started as an interactive media file format intended to streamline the games development process. Today, .xsi is becoming an integral part of the overall creative process for digital media, whether in the film, broadcast or games industries. Hence, the famous software formerly known as `Sumatra’ will be the first component of this new way of streamlining the creative process.”

Building on this concept, the XSI initials will be at the core of Softimage’s new 3-D branding strategy, which will be unveiled, in detail, at NAB in Las Vegas on April 9th 2000(1).

The current development pipeline for the film, television and interactive markets is characterised by disjointed and discontinuous pipeline in which data flows without the need for translation and modification.

It soon became clear that what developed as a means to create, validate and deliver content for games was applicable across the whole spectrum of 3-D animation and could be used as a means to integrate disparate elements of the production pipeline. The .xsi file format is the mechanism utilised within this integration process, but the means to fully realise this process goes far beyond a file format.

The first stages towards this creation and delivery environment are already in place with the file format itself and the SOFTIMAGE|XSI Viewer, a feature that games designers can use to validate artwork before it is passed to the games development team. The SOFTIMAGE|XSI Viewer greatly reduces the need to re-engineer objects due to geometric or animation problems.

Luc-Eric on the name “XSI”:

I believe the name ‘Sumatra’ was dropped purely for marketing reasons,
to reboot the product. After a frantic search for a new name, the
application was then named after the .xsi file format, to indicate its
game pipeline friendliness. Back then, a lot of plans were built around
.xsi, and the app called XSI would be the authoring tool for it.
This didn’t go as smoothly as expected, as the first version of XSI
ironically did not support .xsi and with the emphasis on Mental Ray and
NURBS-only tools, the game story wasn’t there. The origin of the name
was stated in an official press release:
http://findarticles.com/p/articles/mi_m0EIN/is_/ai_60827346

The next day, 17 March, the runners-up (“Manta” and “Tyhoo”) were announced on the Sumatra beta list. Originally there had been a $1000 prize for the winner; since there was no winner, the two runners up split the prize.

Since we’ve finally announced the new name of the product: SOFTIMAGE|XSI
(aka: Sumatra (codename)), we can now announce the “runner-up” winners:

The $1000 will be divided between two contestants. The two names which made it into the final round were: