The Yearning3D still images, created in 1993 by Char Davies using Softimage|3D on Silicon Graphics hardware. Char Davies was the Vice President of Visual Research at Softimage. 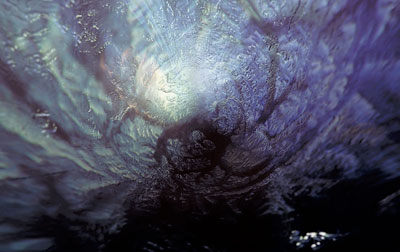 All of my work, including the paintings I made for many years before using 3D software, is concerned with communicating a particular vision of the world. I do not consider these images, The Drowning (Falling from One into the Other) and The Yearning, to be computer graphics or computer art, but rather art created through computer technology. I call them 3D still-images for they are essentially frames of 3D virtual worlds. They were made interactively with the 3D animation software SoftImage. In my research I am constantly pushing the software’s capacity as an intuitive and emotionally expressive instrument, for it is this capacity that I value most.
…
Interactive 3D software (and I should specify SoftImage because my creative method is dependent on it and was in fact born from it) enables me to virtually embody the metaphorical content of these images, bringing them across a threshold from the realm of dim intuition into a “real” world of light and three-dimensional form. By working extensively with simulated light and shadow in virtual 3D space, combining photo-realism and abstraction, solidity and transparency, volume and spatial ambiguity, I am able to integrate subjective and objective, metaphysical and physical realms, in a way that technique and content become synonomous. 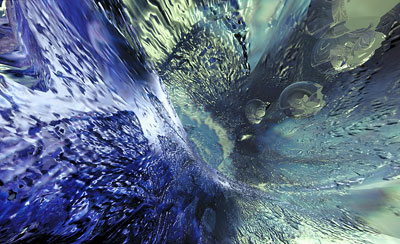 Char Davies,The Drowning (Falling from One into the Other), 1993.
3D digital still image.
Distinction Prix Ars Electronica 93 in the category Computer Graphic.