11 Dec 2002 — Softimage|XSI BatchServe is available immediately from authorized resellers. Through December 22, it is available at the introductory price of $495 per client license or $15,000 for a site license. 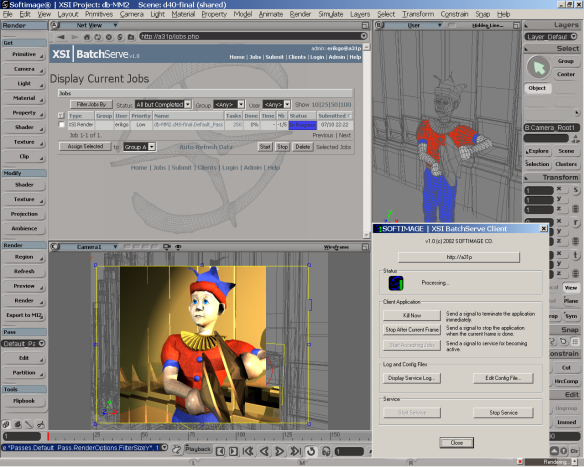 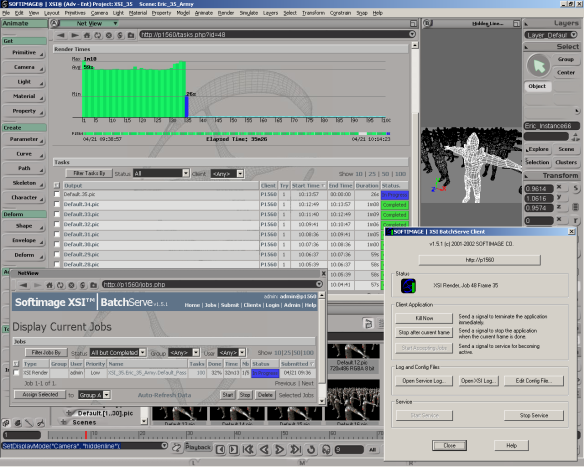 The SOFTIMAGE|XSI BatchServe system allows users to cue up, prioritize and manage rendering jobs from anywhere using a simple web browser and the SOFTIMAGE|XSI environment. With this system, users can monitor the progress of processing or rendering projects remotely, including tracking individual machine performance, previewing rendered images, isolating problem frames, and estimating total render-time. The system can also process scenes, passes, and compositing, and execute any batch script remotely using the processing power of the Softimage family of rendering products. This product family includes SOFTIMAGE|XSI Batch, Softimage’s cost-effective batch processor utilizing the mental ray® v.3.1 technology, and SOFTIMAGE|XSI BatchUniversal, the industry’s most flexible rendering and processing system. Users can also employ SOFTIMAGE|XSI Essential or Advanced licenses to add the artist’s workstations to the render farm when they are not using them.

“Managing a render farm is often a very complex process which requires the constant supervision of highly technical staff. With the SOFTIMAGE|XSI BatchServe system, any animator is now equipped to handle the job. They simply submit their scene and set priorities, and BatchServe takes care of the rest,” comments Michael Stojda, Softimage’s managing director. “Because it is so fast and easy to use, BatchServe significantly boosts the productivity of production houses while significantly lowering operational costs.”

“We believe that our artists and technical staff have better things to do than spend their nights at the office creating and overseeing a render queue,” comments Marco Spier, partner and animation director, PSYOP Inc. “That’s why we decided to use SOFTIMAGE|XSI BatchServe for one of our recent projects, the latest Starbucks commercial. We had to render and composite a 30-second commercial with more than 120 layers in less than a week. SOFTIMAGE|XSI BatchServe allowed us to manage the renders very effectively and complete the project on time.”

Pricing and availability
The SOFTIMAGE|XSI BatchServe software is available immediately from authorized resellers. Through December 22, 2002, it is available at the introductory price of $495 per client license or $15,000 for a site license. For further information please visit the Softimage website at http://www.softimage.com.