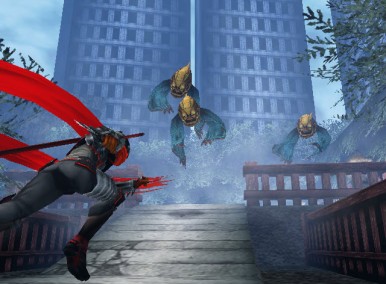 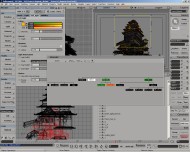 When OverWorks, a division of Sega, decided to update the classic 80’s game Shinobi, they turned to SOFTIMAGE|XSI to help them deal with a massive volume of data efficiently in a short period of time.


In the tradition of the great ninja warrior, things are not always what they appear to be on the surface. Ninjas, for example, were masters of espionage as well as lethal combat. So it is not surprising that Japan’s OverWorks, a division of Sega, decided to update Shinobi, the classic 80’s game, to reflect the more complicated nature of ninja culture. Okay, maybe that isn’t exactly true. Maybe it was really about giving a kick-ass game more kick-ass. Turning up the kick-ass, however, is no easy task; it requires a lot of work and volumes of data. To help with this massive undertaking OverWorks switched to SOFTIMAGE|XSI.

Takeshi Matsuura, a CG Director at OverWorks explains that, “with the amount of work to be done in a specific amount of time, we knew we had to work efficiently. And, to get the job done, we adopted SOFTIMAGE|XSI.”

Although the history of Sega’s Shinobi is not quite as long as the real Shinobi Ninja, which dates back about eight centuries, this Shinobi does have a rich and deep past. The Shinobi series was one of Sega’s pillars in the late ’80s when the company began making its move into the home console market. The series showed off Sega’s ability to take advantage of its own hardware–both in the arcades and on its home consoles–through three memorable games.

Two decades ago, when Shinobi was experienced in 2-D, the main combat element was throwing the shuriken, which is a small knife or star. These days, things are a lot more complicated. Bringing the Shinobi world into three dimensions means that both attacking and defending happens on all sides. This, in turn, means that the focus of the game is now face-to-face rather than ranged attacks. Not incidentally, this also means that you can work up some serious kicking and sword brandishing combinations.

In the newly released Shinobi, players take on the roll of Hotsuma, the leader of the Oboro Clan. The Clan members have all been slaughtered by the evil sorcerer Hiruko who has also destroyed the city of Tokyo for good measure. And as if this weren’t enough, Hiruko has raised the Oboro Clan from the dead and is now using them for his sinister plan. So in order to lay his slain clansmen to rest, Hotsuma must destroy them. To accomplish this, Hotsuma wields the Akujiki Sword, a sword that feeds on the evil souls it destroys, or failing that, will feed on the soul of the one who carries it. This means that players must constantly seek out and destroy their enemies. This design feature encourages speed and destruction, which ultimately satisfies all those gruesome urges that take us to video games in the first place.

SOFTIMAGE|XSI was used for background, modeling, lighting and rendering on this project. When asked what makes SOFTIMAGE|XSI such a powerful tool overall, Matsuura is quick to reply with an extensive list: “Character rigging, motion modification and editing, as well as rendering, to name a few.” Further, Matsuura points out that it is the combinations of tools that make SOFTIMAGE|XSI so complete. For example, the combination of the Schematic View and the Explorer helps significantly with data management as “any data that was difficult to manage in the Schematic View could be easily managed in the Explorer,” explains Matsuura.

And, if you want to see more of just what the talented developers at OverWorks can do with the right tools, check out the cinematic at the beginning of Shinobi. That’s all done with SOFTIMAGE|XSI too.

What’s ahead for OverWorks? Well Masahiro Kumono, the Chief director on Shinobi, says that it is SOFTIMAGE|XSI. “In the future, we will not make games without SOFTIMAGE|XSI. We are confident that SOFTIMAGE|XSI will continue to improve, particularly in the areas of material setting and motion editing functionality. We will once again use SOFTIMAGE|XSI for the CG rendering as well as the real-time game.”

As for the developers at OverWorks, they are looking forward to really getting into all the functionality that SOFTIMAGE|XSI has to offer. For his part, Matsuura singles out Net View and Synoptic View, in particular, as “Net View will make file management easier and Synoptic View, with its intuitive graphical interface, will help when we are dealing with large workgroups.”

As for Shinobi… will Hotsuma avenge his fallen clansmen? Will he save Tokyo from further destruction? Or will the Akujiki Sword take his soul? Well, that is up to you, isn’t it? You can be sure it will be fast paced and thrilling if OverWorks and SOFTIMAGE|XSI have anything to say about it. And they do.