I came across this SOFTIMAGE|3D photo in an article on rotoscoping. It shows ILM co-supervisor Tom Bertino working on one of ILM’s Flubber shots. 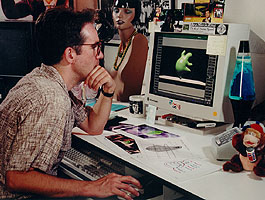 Once the background plate was scanned into ILM’s Silicon Graphics computers, the match movers went to work. “We’re able to bring up that clip in the computer in a Softimage 3-D environment,” says Bertino. “The matchmovers then took what’s seen on film and recreated it in primitive wireframe models.”
—Breaking the Mold:Physics of Jell-O Inspires CGI Stars of Flubber

A little more time on Google led me to some postings on vimeo from Philip Edward Alexy, who was the lead technical animator on Flubber.

First of all, sorry for the quality: this was ripped from a DVD copy of a D-beta tape.
As you can see, there is a heck of a lot more going on that you would think for this shot. As you see at the beginning, there is the Blob Flubber sitting in the matchmove representation of Robin William’s hand. Now keep in mind, back then, all of the matchmove stuff, both camera and object geometry, was HAND-ANIMATED. There was a crew of guys from the old practical ILM shop who transferred into the digital side: some of these guys worked on “Empire Strikes Back” and onwards, so they knew how cameras worked and were able to use this experience to do the one thing that made ILM stand out back then, properly reconstruct scene and camera information into the computer.
So we have the Blob sitting there, with what appears to be somesort of orthopedic back-brace and a black fuzzy alien sitting in its belly. Well, the “brace” is in fact the up-vector construct I had to develop because the Meta-Clay elements that made up the Blob Flubber where not spherical, they were shaped like overlapping mass of blobby M&Ms because when the client want to get away from the “pear-shaped” Flubber that spherical Meta-Clay created. BUT, Softimage3|D didn’t have up-vector constraint and (of if it it, it did not work well at all) when they were lined up on the cluster-deformed path spline that held them in place, they would start flipping randomly along the shortest axis. This was bad because it looked like the Flubber was having a seizure when animated. So I had to invent an up-vector constraint that worked consistently. So that’s what the “brace” is, which had to be, at times, key-framed to prevent the flipping.
So what’s that alien? Why it’s the Puppy Flubber rig, elements and geometry, all compressed, waiting for the moment Robin Williams sticks his fingers into the Blob Flubber. Presto-change-o, without any quick cutting or changing of the scene file because of the nature of Meta-Clay, the Puppy Flubber pops up, all ready and IK-rigged, and the Blob Flubber lines up inside the body part of the Puppy.

The puppy design, by Scott Leberecht, had to be envisioned with the tools at the time, which was Meta-Clay balls in Softimage 3|D. If you had ever used that tool, you would understand what a task it was to get the right shape, and then rig it so it could be animated.

At the time, it was the densest CGI structure ever made. There were about three hundred Meta-Clay elements, all spine/spline/cluster controlled. It took about two minutes just to refresh to the next frame. It took me about two months to build and rig.

A bit of test animation, to show that ILM could actually DO the Character Flubber, that ended up in the official Disney trailer.
Little bit of trivia: all those bubbles you see? They’re not part of the shader: those are all individual pieces of geometry that are parented to the rig. Sometimes, because they would fly out of the mesh depending of the pose, they had to be key-framed

This one shot took a year to do. Seriously.

Finally, in a Word document at ncca.bournemouth.ac.uk, I found this. It’s attributed to a no-longer existing page at Philip Edward Alexy’s web site.

“We had thought of doing something where we could use B-spline patches that we could shape animate over time. But, that wasn’t practical because Flubber changed so much within a sequence that it would have been too time-prohibitive to model all the different forms. Even when he was just a little blob he changed so much that to do it using patches, shape animation and lattices just wouldn’t work.”

“Since the Flubber character was composed almost entirely of metaballs, the animators could easily turn him into anything from a pair of lips to a tail-wagging puppy to a hip-shaking mambo dancer. In addition to Softimage, ILM developed several custom effects to turn a blob into everything that blobs could possibly become within the animators’ collective imagination. Several Flubber models were developed: the Basic Blob, a male and female Actor-Flubber, a Scare-Flubber, a Puppy-Flubber, a Fingers-Flubber, a Bubble-Flubber and several others – each more difficult to pronounce in rapid succession.”
— http://www.flyingsheep.org/work/resume/html/resume_pub_flub.html