Experience XSI 4: The Official Softimage XSI 4 Guide to Character Creation
A look at the new book by Aaron Sims and Michael Isner which guides you through the production process of a digital creature from start to finish.
July, 16th, 2004, by Raffael Dickreuter 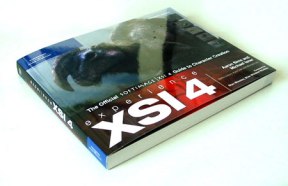 When you go to the bookstore you find tons of books focusing on 3d, modeling, animation and all kinds of different software packages, but very few were written for XSI. Finally there is another one, and it’s a really good one.

This book is written by industry experts Aaron Sims and Michael Isner. Aaron Sims is a character creator at Stan Winston Studios. He has been involved in projects like Terminators 3 and Steven Spielberg’s A. I. Michael Isner is the head of Softimage Special Projects and one of the key people behind XSI’s character tools. They have teamed up to explain the production process from start to finish. Sims and Isner together means a collaboration of art and technology knowledge.

The book in general is written for an audience that is already familiar with the concepts of 3d and XSI. However it contains a few pages that will help users from other packages quickly adapt to the XSI interface and workflow. This also might help users who are somewhere between a beginner and intermediate level.

Chapter 1 is a quick introduction to the interface and contains a hotkey list. It makes it ideal for experienced artists to find the most important commands within XSI quickly.

Chapter 2 gets you started with designing and modeling a character.

Aaron explains the thought process that is used when designing a 3d character, such as: how it has to be appealing for the audience and that you have to really know how you intend to animate the character, if it’s flying, walking, swimming etc…

Initially there is a quick overview of the modeling features where you will start with a sphere to model a basic shape of your creature. Later on you learn how to add lots of detail and gradually the shape turns into a stunning dinosaur. Altough you can see modeling process in the images, it doesn’t explain the exact concepts how details were added.

Chapter 3 deals with using the texturing tools in XSI.
After a quick overview of how to use the most important features like bump mapping, displacement mapping, texture layers etc… You learn how to use different subprojections to texture a human face. The knowledge you get during this process is then used in the more complex task of texturing the dinosaur. After applying the textures onto the mesh you learn to mix the color maps, specularity maps, bump maps and transparency maps together. Aaron also shows you how to texture the nails and the eyes of the dinosaur.
Your character is now ready for the Skeleton setup. The book also offers a website where you can download the mesh, textures and scripts. People who want to compare their mesh with the original, learn from it or simply skip some chapters can benefit a lot from the accompanying materials.

Chapter 4 dives into character setup. Michael Isner shows how to use guides that let you easily define the proportions of a setup. There is a section that shows how to use the new character tools of XSI version 4 to quickly add more fingers, toes or tails. Step by step you go through the process of creating a proper rig for the dinosaur, including creating marking sets, symmetry maps and weight painting. You will also get accustomed to the new constructions modes that were introduced in version 4 and let you divide the working stack.

The first part of this chapter deals with the most important rigging features. The second part goes way deeper and explains the fundamental mechanics of character setup tools in the XSI software. Besides constraints you get a glance at scripted operators, springs and how to use different character components such as the spine, tail, legs. The portion that shows you how to solve flipping problems and takes an in-depth look at enveloping algorithms is very interesting. Later in this chapter you will learn how to use control splines for proper shape deforming, how to model different shapes and use them for shape animation. The chapter also reveals information about character engineering at a production scale and how you can use scripting for improving your rigging process and explains the fundamentals of the rigging SDK.

Modeling and texturing of a dinosaur.

Chapter 5 demonstrates how to create a walk cycle for your dinosaur. Aside from creating poses you learn how to use the controls you built earlier, such as the footroll control, to create a smooth animation. Step by step you go through the F-Curve Editor and the Dopesheet. You continue to store your animation so you can use it with the Animation Mixer for non-linear animation. At the end you modify your dinosaur with shape modeling, which lets you close and open the eyes of your character.

Up till now most aspects of the training were directly connected to the dinosaur. In chapter 6 Michael Isner goes a bit off and gives you very good introduction into scripting. People who are not familiar yet with programming or have just a basic understanding will find this straightforward chapter very helpful as he guides you through passing variables, looping, collecting selections, arrays, creating vectors etc… After some basic exercises you learn to create helpful tools and find solutions for problems that can only be solved with scripting. After this chapter you will also know how to create geometry entirely with scripting. You might start as a beginner and leave at an intermediate level, just by working through this chapter.

Chapter 7 then goes back to the dinosaur where you will add Lights and an environment to your scene. Several different lighting types, different rendering techniques such as raytracing, scanline rendering, global illumination, final gathering and caustics are examined throughout this chapter. The rendering of the dinosaur will be split up into different render passes and composited together in the FX Tree, where you can apply color correction and finish your composition.

Rigging, Animation, then rendering in passes and compositing.Chapter 8 covers the most important concepts of exporting your character to Softimage|Behavior, creating actions for crowds animation and bring the crowds back to XSI for rendering. For a person entirely new to Behavior this might be a bit difficult to understand what really is going on, but you will get an idea of the potential of the software.

Chapter 9 shows some of the stunning work that Aaron Sims and Michael Isner created during their careers.

Summary
Experience XSI 4 is a great book. You learn from start to finish how to create a complex character by using advanced features within XSI. It doesn’t try to explain every feature that there is, it just focuses on what you need for the specific task. Scripting, that might have been a bit difficult to get into for people with not too much experience in this area, is very well laid out and gets people a quick start who want to dive into it. This book lets you quickly learn new concepts that you can use for your own work. A must have for every enthusiastic XSI user, or experienced users, that want to switch quickly and easily from another package.