‘Theocracy of Hackers’ Rules Autodesk Inc., A Strangely Run Firm
Can the Latest CEO Survive A Cabal of Programmers Who Send ‘Flame Mail’?

May 28, 1992
Just as Microsoft Corp., the world’s largest software supplier, is an extension of the personality of William Gates III, Autodesk is largely a creature of Mr. Walker. Like Mr. Gates, Mr. Walker is superb at identifying computer trends and spreading his vision to the troops. But unlike Mr. Gates, Mr. Walker, 42, never really wanted to run his company. “I’m an engineer, I’m a programmer, I’m a technologist,” he says. “I have no interest in running a large U.S. public company, and I never have. It was a means to an end to accomplish the technological work I wished to achieve.”

He relinquished the top spot in 1986 to Alvar Green, formerly Autodesk’s chief financial officer, to return to programming. But the real power still rested with Mr. Walker, Autodesk’s biggest shareholder, and an elite group of programmers called “Core,” who had either helped Mr. Walker found the company in 1982 or led its most important projects.

Core members are contentious, eccentric free-thinkers who have had a way of devouring professional managers. They have often attacked each other and company executives, usually by sending “flame mail” — biting electronic letters. The outbursts sometimes have led to changes, and sometimes brought work to a halt. “The whole company is a theocracy of hackers,” says Charles M. Foundyller, president of Daratech Inc., a market research firm in Cambridge, Mass.

— from a 1992 article in the Wall Street Journal

END_OF_DOCUMENT_TOKEN_TO_BE_REPLACED

Here’s a quick tip if you need to re-download the original release version (for example, Mudbox 2013) instead of a service pack: use the Autodesk Virtual Agent.

Subscription customers can always download the release versions from the Sub center, but on the public autodesk.com site, only service packs and upgrades are available. For a product like Softimage, that isn’t usually a problem: you can just download the latest service pack. But that isn’t true for every product (for example, sometimes a SP is a patch that requires the original release version).

Word cloud for the Customer Guide to Autodesk Advanced Support.

On this subject, now that the AREA forums have been updated, I suspect Maya/3dsMax/Softimage customers are one step closer to forum support. From the Advanced Customer Guide:

Proactively Escalate Forum Posts to Autodesk
Autodesk Advanced Support provides you with all the benefits of Basic Support, including expedited community forum support: if the community does not respond to your posts within 24 hours, they are automatically escalated to Autodesk.

Since I left Autodesk, I’ve been asked a few times whether there’s a secret way to reset expired trials 🙂 The short answer is No. Even for Autodesk employees, that’s how it is. Zero-filling your hard drive is pretty much the only way to reset a trial license.

With a little help from Process Monitor, I figure out Composite licensing…

That’s 80,000 characters, not including spaces. Here’s a graph of the EULA size over the Softimage releases. 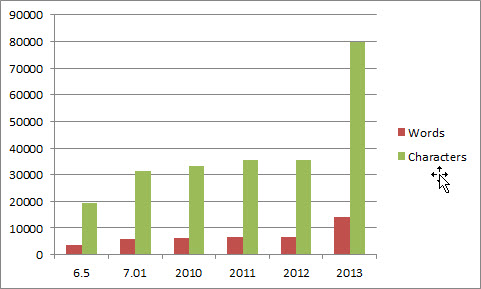 It looks like the M&E EULAs were one release behind the AutoCAD EULA. The big size increase didn’t happen until the 2013 release.