Of Mice and Models

A series of UK television commercials for Aero candy stars some extremely talented digital mice who sing, dance, and even hula-hoop. Despite their efforts, the mice fail to impress chocolate buyers and scurry away dejected. The ad campaign began with a 30-second commercial featuring one hula-hooping mouse, who is joined in a second spot by dozens of others, including one that sings Chinese opera and performs an elaborate, oriental-style dance. The most recent spot, which is expected to air soon, contains a group of mice performing a complicated Irish step dance.

Creating these gifted photorealistic creatures and giving them naturalistic move ments required a similar amount of talent and ingenuity on the part of the modelers and animators at digital effects house Glassworks and animation production company Passion Pictures, both located in London. According to Alastair Hearsum, head of 3D at Glassworks, the computer-generated mouse in the film Stuart Little set a high standard against which the audience would judge the Glass works character. For its Aero mouse, though, Glassworks chose a different tack by dispensing with the character’s clothes and opting for a more realistic approach compared to the stylized Stuart in terms of appearance and movement.

“The challenge was to create a mouse that the audience believed was real,” says Hearsum. “It had to move like an actual mouse, and have realistic proportions and features.”

The 3D animations of the mice were inspired by 2D pencil drawings from Passion’s visual effects director Chris Knott and animation directors Tim Watts and Alyson Hamilton, who had collected various mouse images before making character drawings. The duo worked closely with Hearsum to produce the convincing personalities of the mice. Glassworks then constructed the mice models, added realistic fur, and animated them to move under Passion’s guidance and direction within a live-action environment.

“There are no complicated rigging setups, layered expressions, or complex shaders with the exception of the fur,” notes Hearsum. “But that’s not to say that the project wasn’t challenging. One of the more difficult aspects was getting the mice to look sweet and move in simplistic yet charming ways.” This was accomplished, in part, by using a fairly blank facial expression for all the creatures, so they wouldn’t look anthropomorphic, despite their humanlike actions.
Mouse Modeling
Whether a scene has one mouse or a hundred, each character originated from the same model, which Hearsum built with separate NURBS patches using Soft image|3D running on an SGI Octane system. He then constructed a complex skeletal structure for the model, whereby the skeletal parts that were controlled by inverse kinematics (IK), such as the arms and legs, would be limited to two connecting joints. With this structure, the shoulders were not part of the arms, but linked to them as parents rather than children in the chain. That setup, combined with the vector constraints, gave the group total control over the movement of the arm and shoulder, for example, and eliminated rotational or other range-of-motion issues that can occur when multiple joints are interconnected within the bone structure.

To achieve the intricate and realistic foot animation in some of the scenes, Hearsum set up the root of the foot’s bone structure at the bottom of the foot rather than at the ankle. This made it easier to keep the ball of the foot stationary when the animators stood the mouse on its tiptoes. Specifically, the foot’s main bone structure contained one joint with the root positioned near the toes, and the effector (the endpoint in the chain that poses the rest of the chain) positioned at the heel and ankle areas. The leg effectors, meanwhile, were constrained to the effector of the foot joint, and the middle three toe bones were constrained to the root of the main foot bone. “Therefore, when the mouse stood up on its toes and its foot was bent, the toes remained flat to the ground,” explains Hearsum.

For skinning the model, the artist used Softimage’s binding box feature, which automatically includes or excludes the points associated with a particular joint that falls within the box. “They are a pain to set up, but by using them, I was able to reskin the mouse in a matter of a few minutes,” says Hearsum. “Early in the process, the mouse was in a constant state of flux, especially the facial region. Using the binding boxes enabled me to quickly and easily accommodate changes from the client.”

The modeling efforts only scratched the surface when it came to achieving a photorealistic appearance for the mice. The key element was the hair, created in Glassworks’ FurShader, a combination Softimage|3D plug-in/Mental Ray shader that has been in de velopment at the studio for the past three years. It was first employed for models of spiders appearing in TV commercials for other brands. The software provided wireframe control hairs, and by directly manipulating the control hairs through their individual IK, the group was able to style the fur to create a different look for each mouse appearing in the series.

“For instance, FurShader enabled us to give the opera-singing mouse a more feminine demeanor by making its coat fluffier,” says Hearsum.

During the rendering process, FurShader fills in the gaps between the control hairs with a specified number of hairs. On average, each mouse had roughly 500,000 hairs. The software also controls the tip and root color, and thickness of individual strands, enabling the artists to create a unique appearance for many of the characters. “Its own antialiasing eliminates any ‘buzzing’ problems that can result when you have a lot of fine detail in a frame, which can interfere with the scan lines of the TV,” says Hearsum. Furthermore, each hair is fully raytraced and integrated into the scene during rendering rather than postproduction. As a result, the hairs cast and reflect shadows. “It truly made a difference in the realism of each shot,” he adds.

As a final touch, Hearsum used a great deal of motion blurring. This helped to seamlessly integrate the models into their respective live-action scenes, which was done using Discreet’s inferno. “The mice are moving quickly in the commercials, and we used motion blur so they wouldn’t look computer-generated next to the live actors and scenery,” he explains.

Even with the mouse “cloning” process, it took Hearsum’s team several weeks to generate the numerous characters and their complex movements for the subsequent commercials. “There was more work in the first scene of the second commercial-which had five mice-than in the entire first commercial, which had just one mouse in each scene,” says Hearsum.

Although arduous, bringing the CG mice to realistic virtual life was rewarding for those at Glassworks and Passion Pictures. In fact, the studios won accolades from industry peers for their work on the initial project, receiving two British Television Advertising Awards for Best Animation and Best Computer Animation.

back-maintenance amnesty for xmas 2003!
(That means you could upgrade without having to pay maintenance for however long your maintenance was expired.) 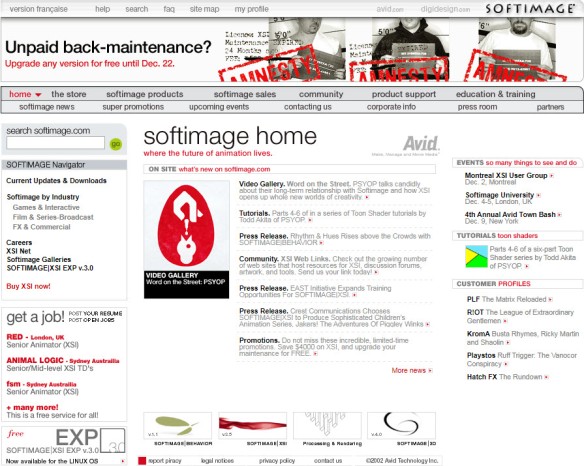 From start to finish…hp workstations
circa 2001 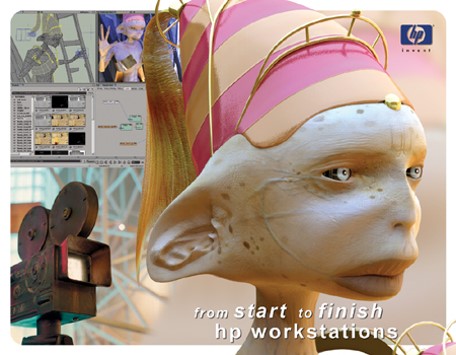 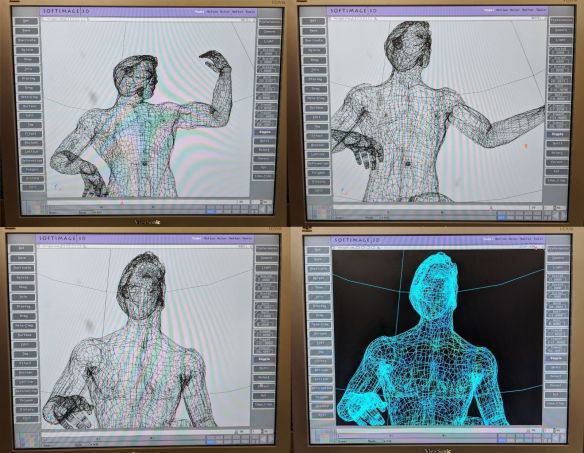 Some more pics, including Maya 6.5, LightWave 3D 5.6, and Power Animator 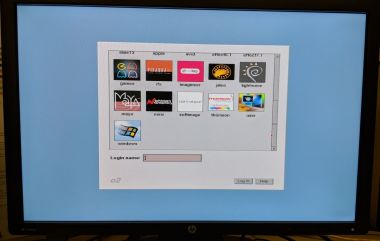 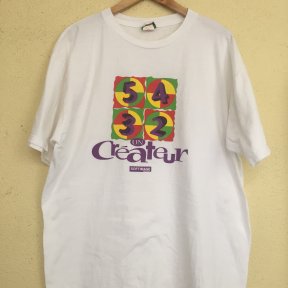 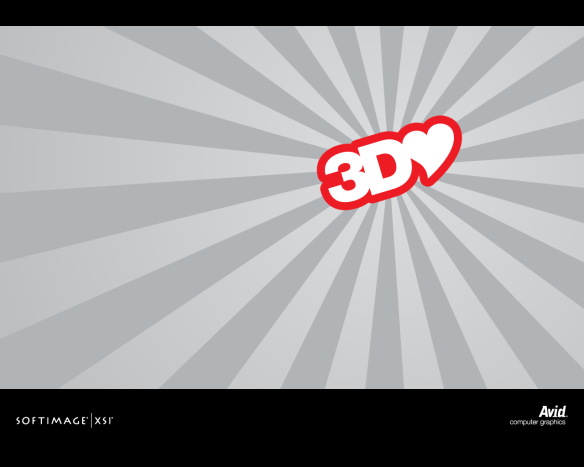 “Non-realistic” rendering with Softimage|XSI 1.5A2.0 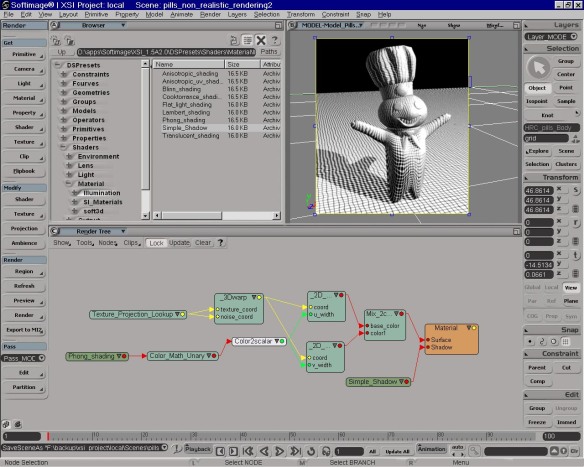 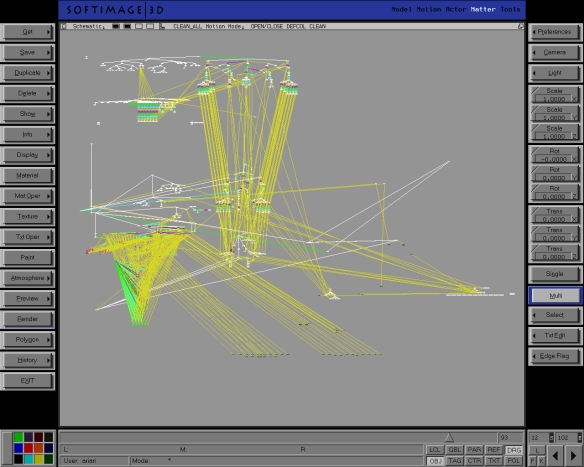