Tell us how and why you got started in the cg industry?
When I was 18, I dreamed of becoming the lead guitarist of a big band that would tour around the world or becoming a professional skateboarder. For some enigmatic reasons, I ended up in Finance at the University of Montreal (HEC). But the day that I saw the T1000 in Terminator 2, I realized what I really wanted to do for a living and that would be Special Effects.

In 1992, a close friend of mine introduced me to the world of computer graphics. I realized that the possibilities were endless. I kept on studying full time in Finance but was spending 6 to 8 hours a day learning 3D at home. It was the biggest hobby I ever had.

When Jurassic Park came out, I heard the professional software used for the dinosaurs was Softimage 3D and that it was made in my hometown Montreal. My dream of working in that field was more than ever possible. As soon as I got my degree in 1996, I took a specialize course in 3D animation at the NAD Centre. Once I finished, I got a job at Hybride in 1997 as a 3D animator. It’s been 10 years now.

What do you like to do in your spare time?
For what I remember, I use to play guitar, mountain bike and snowboard. But now I have a 4 year old son and I’m trying to spend most of my spare time with him and my wife. So the correct answer would be I play with Legos and Transformers and make up my time to not miss the incredible kids channel shows.

Tell us about your responsibilities on 300 as Lighting and Texturing Supervisor
As the Textures and Lighting lead, I have to evaluate the complexity of each sequence with the supervisors. I establish procedures to speed up the artist’s work which includes constant R&D; on new techniques to texture and light scenes. I make sure the outputs of my team suit the compositors needs. I guide my colleagues technically as to follow the art direction and to keep the composition in place. And finally, I take care of delivering some of the more complex shots.

What were the biggest challenges in order to deliver the desired look on this production?
We had to transform the very stylistic look of the renowned American comic book author into film: silhouetted images, painted skies with brush-stroke effects, contrasting colors, charcoal blacks, and so on. For the environments created, each structure had to be an obvious part of Frank Miller surreal world before to be photo reel. The Hot Gates walls and skies were probably the most important aspect to define before to start the production. It was crucial that each vendor respects the exact same look. In order to help that process we received detailed documentation and concept arts about the look we had to achieve.

The wolf is another good example of the style they were looking for: a surreal beast in a photo real environment developed with an artistic touch. In the graphic novel, the wolf appears only as a huge black silhouette with red eyes. We kept those elements and integrated skin, muscles and hair to go a few steps closer to the real world.

We created high dynamic range environments for each sets. The effort on textures was critical to accomplish the movie style. In fact, we had to reduce the contrast levels on the 3D side to bring them back with the live footage on the final comp. The combination of flat textures with dynamic lighting helped us deliver images that allowed great flexibility for extensive color correct sessions.

The textures created where either a mixture of procedurals done in Dark Tree called within XSI or a good use of quality pictures taken from the actual set.
The matte paintings were developed over shaded scenes lit using final gathering or light rigs.

For many locations, specific light rigs where built at a very early stage and we used internal scripts to automate the creations of the passes required by the compositing department.

What kind of inspirations were used to inspire the artists for this kind of look besides the comic book?
Sin City and Sky Captain and the World of Tomorrow were without a doubt a major influence because they allowed us to work on very stylized movies that were entirely shot on green screen. We acquired a great confidence and expertise in that kind of movie.

One of the biggest sources of inspiration was the artwork sent by the production. It definitely captured the essence of the comic book and gave us a great head start.
The detailed and very technical documents done from the art department were essential to define properly each location and to develop the appropriate look for the backgrounds and skies. Each section was defined by a specific color palette to the great pleasure of the artists.

How long was the production schedule for the team at Hybride?
Hybride produced 540 visual effect shots for a total of 45 minutes. A total of 95 Hybride employees worked on the project for 16 months. We were 45 in the 3d department, 35 in the compositing department and 15 in administration and technical support.

We had a wide variety of shots to do:

How was the processing of the life action footage to not only blend with the cg elements but at the same time look stylized?
We had to start by matching the 3d environment to the live footage to pretend they were shot simultaneously. Once the integration done, we stylized the whole image with the help of different passes (mats, depth fading, etc…). The extensive use of color correct definitely eased the integration of the live footage with CG elements.

How was XSI used in this production?
XSI was used to generate almost every 3d elements. The software was very efficient to create complex environments, to do character animation and to manage army scenes with more than a 100 000 soldiers.

Which features were especially useful?
The ability to built solid output pipelines with the creations of customizable passes was without any question a very important Feature in XSI.

These Features where also very usefull:
1. GATOR to transfers any surface attributes
2. Ultimapper to grab normal maps and occlusion maps.
3. The Render Tree to build complex shaders
4. The Fxtree to do practically everything with image clips.

Which areas of the software should be improved?
The procedurals could be improved in XSI. More than ever, we are asked to generate full cg environments and the usage of procedurals is very efficient for that need. It would also be nice to improve the Texture Editor with some tools such as Uv Layout’s flatten tool and Deep Uv’s Relax tool. And since Pixologic’s Zbrush is now used everywhere, it would be interesting to include a Ztool reader in XSI. That would allow to interactively change the meshes resolution in a different way than with referenced models.

Do you think we will see more movies in the future like this and what possibilities do you see in this kind of filmmaking?
More movies are shot entirely on green screen. The director can do what he wants with each shot. I think this way of filming will become a standard. The big advantage consists in the infinite freedom of creativity that last long after the shooting is achieved. For 300, the graphic quality quickly takes over the complex and technical aspect to generate the images. This allows the audience to plunge in Frank Miller’s fantasy world. It is obvious that a new trend of film is emerging, a trend that joins more than ever the art of telling a story with the art of drawing that story.

Is there anything you would like to say to the rest of the cg community?
Nothing is more thrilling than working in a field in constant explosion. Not evolution, explosion. Each year, I’m overwhelmed by the images produced by the movie and the game industry. All technical borders are falling apart. The tools are more efficient and the artists more talented. There is no doubt that everything that made this profession exciting ten years ago is true more than ever and I’m delighted to be part of it. 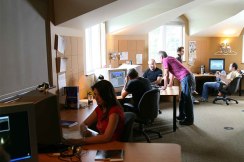 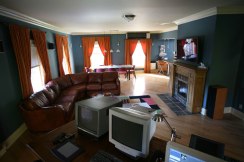