Superior engineering. Visionary architecture. Never before has a software solution been so open and so flexible.
SOFTIMAGE|XSI version 4.0 is completely customizable, offering unmatched access to the core of the software
and giving unparalleled control over a dramatically accelerated creative process.

Image courtesy of me company. All rights reserved.

Although the majority of Me Company’s output is in two dimensions, the production process involves three, “XSI is our illustration tool of choice,” says Paul. “It’s the way we express our ideas.” The results, which Paul calls ‘hi-res stills’, capture the world of possibilities Paul and his creative allies envision in response to a particular brief. What makes this work is a faith in the value of the creative process itself: “We follow a line that interests us and try hard to push things forward.”
—https://www.creativebloq.com/3d/me-company-3059893

“When FIFA and NBA were looking at starting
on the next generation of their product, they
decided it was time to look in the marketplace
and evaluate the products that were out there.
So we literally put everyone in a classroom and
ran them through the scenarios that they
were actually going to be doing in production
with a variety of softwares, and, in the end,
we decided that SOFTIMAGE|XSI was
the best way for us to go.”
3-D Non-linear Production Environment.
download the free XSI Experience at:
http://www.softimage.com/experience
John Rix
Director of Visual Development
EA Canada 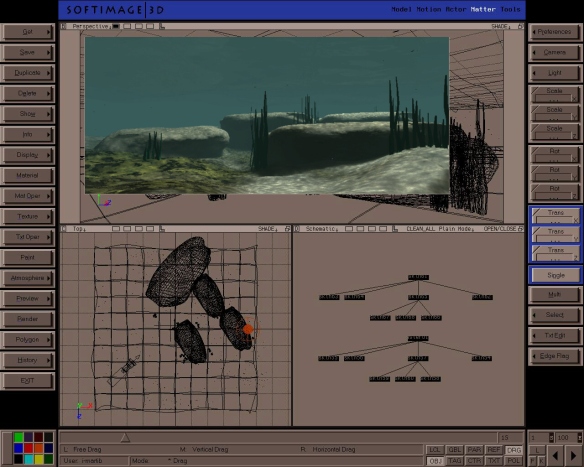 Every story needs a beginning. Ask around and most digital artists are more than happy to tell you theirs. Every story is different, of course, and usually interesting in its own way, but most of them inevitably involve New York, Los Angeles, or London. I ain’t complaining, you understand, but you’ll understand how my ears pricked up when Sandy Sutherland started telling me his story.

“I got into 3D when I was still living in Kenya,” says Sutherland, now Senior Animator at The Refinery in Cape Town, South Africa.

Getting started in Kenya. Now, that’s a beginning. I mean, how many people can say that? Not many can, according to Sutherland.

“I started out freelancing with my own equipment, which in those days consisted of an old Commodore Amiga equipped with Sculpt Animate. When a local post facility decided to get into high-end animation, they bought one seat of TDI Explore running on a Silicon Graphics 4D 25 and I was hired to drive it. I was really the only person in Kenya with any 3D experience, so that was my big break.”

And, of course, it is from big breaks that great careers grow. It was Sutherland’s success in Kenya that brought him here to Cape Town – and to a crucial position at one of South Africa’s largest post-production facilities – nearly six years ago. Specializing in high-end television commercials for both the African and international markets, The Refinery is based in Johannesburg, but Sutherland calls Cape Town home. He is also quick to praise SOFTIMAGEÒ |XSIÔ v1.5, his system of choice for 3D character animation. When asked how SOFTIMAGE|XSI fits into The Refinery’s production pipeline, his answer is simple and succinct.

“XSI is our production pipeline!” says Sutherland emphatically. “It simply has everything we need for the type of work we do.

The Render Tree, the Animation Mixer and the vastly improved modeling tools, which in version 1.5 cover every style of modeling, from basic polygonals to complex subdivisions and very strong NURBS tools: it’s all there.”

Sutherland’s fervor for the latest version of SOFTIMAGE|XSI is such that he can speak with enthusiastic authority about virtually every new feature.

“The entire workflow is greatly improved in the latest version,” Sutherland explains. “I can now spend more time on animation and, thanks to the Custom Parameter sets, almost no time on character or system setups. All the setups that I used to have to do using sliders are a thing of the past. Softimage really seems to have been watching how people work and have responded with a well-thought out system.”

Singled out for special praise, however, is the SOFTIMAGE|XSI Animation Mixer: “The Animation Mixer has allowed me to experiment more,” explains Sutherland. “Now, I can mix different animations until I have what I want, all without destroying animations that were close, but not quite there! What I like most about the Animation Mixer is that it functions much like a nonlinear editor: you can drop a section of footage or an animation onto the timeline to mix it into another piece. That simplicity lets me focus on particular pieces instead of the whole character, then add the bits into one using the Animation Mixer tools, all of which makes things more flexibility and efficient. Weighting was for me a nightmare before, but now with tools like the weight painting, it makes things far easier. I have used the new weighting tools recently, and I love them!”

Nowhere were the benefits of the Animation Mixer more apparent than on a recent project for Bubbaloo Chewing Gum, a long and particularly challenging project for Sutherland and The Refinery.

“With the Bubbaloo cat character that we’ve been focusing on most recently, we had some animation on which another of our animators had worked. With an earlier setup version, it would have been far more difficult to bring the animation across to another system but, thanks to the toolset in SOFTIMAGE|XSI, it was a breeze to transfer and reuse. More than that, one of the scenes of the Bubbaloo cat included some motion capture work. When the clients saw it initially, they didn’t care for some of the larger motions we’d used, so we used the Animation Mixer to maintain the basic motion capture look, while softening the motion to the client’s satisfaction.”

In a business where clients are rarely, if ever, satisfied the first time around, Sutherland sees SOFTIMAGE|XSI’s animation editing tools as a godsend. “The non-destructive philosophy of SOFTIMAGE|XSI has been great for me so far,” elaborates Sutherland. “We always have clients who make certain creative decisions, then reject them and want to return to an earlier version. Now, all we have to do is change the strength of the sliders in the Mixer, rather than having to search through previously saved files in order to find the ‘previously preferred’ animation. The immediate updating of parameter in the Render Region also speed things up immensely. I was working with the director of the Bubbaloo spot recently, and he asked if we could change the color and tone of the lights, as he had gone for a golden tone on his footage in telecine. I put some footage in the Rotoscope Camera, and using the render region we were able to quickly and easily adjust my lights to match the footage. The director was amazed, mainly because he was expecting to have return later to see the changes. I was able to show him right away.”