In looking through some old PDFs, I found the PDF for a SOFTIMAGE|3D brochure from 1996, which included this page with some [rather low quality] images from the Joe Fly spot from Spans & Partner. 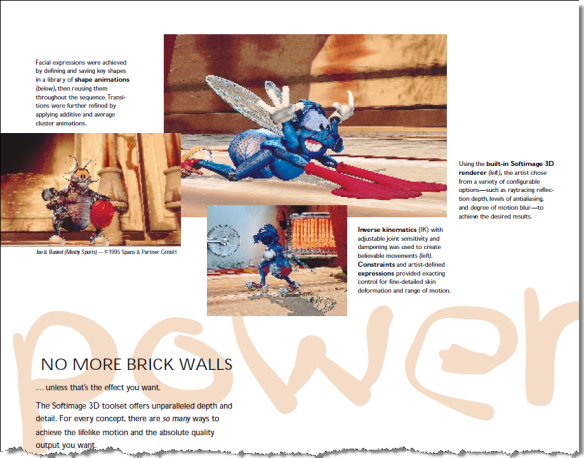 I remember them showing Joe Fly during one of the staff meetings:

Here’s some info I got from the google cache:

This delightful animated short was first released in 1995 at the Siggraph electronic theatre, and has since garnered multiple awards including: People’s Choice Award and winner of the Fiction Category at Montreal’s Images du Futur festival; a World Silver Medal at the New York Film Festival; and a Best of 3D Animation award from Dr. Dotzler Medien-Institut in Germany. After its original release on film, the piece was shown on several European networks, including Premiere TV and Germany’s ZDF.

The original film was rendered in 2D and distributed on 35mm film, and was wholly developed by Peter Spans, who also developed and directed the re-creation for CyberWorld 3D. The approach and challenge during this production was to combine loveable character animation with the very complex backgrounds, all seen from an insect’s perspective. Almost one hundred percent of the original material was redone when re-creating the original data for presentation in the 3D 15/70 format for CyberWorld 3D.

The normal software packages used by Spans and Partner make up only 65of the Company’s resources, with the remainder being developed as proprietary technology by the Company itself. Joe Fly & Sanchez was wholly rendered with Mental Ray on seven Compaq ES40s with 4 gigs of memory each. Mental Images helped Spans and Partner to optimize the very large 3D databases so quality was not sacrificed. Compaq provided rendering advise and Softimage supported for the cyberworld 3D software component with special thanks to Dirk Weinreich. Part of the compositing was done on SHAKE from Nothing Real.

After working as director / head of design for other companies, Peter Spans founded Spans and Partner in 1991. The Company creates character animation, as well as special effects animation for feature films and advertising. Cyberworld